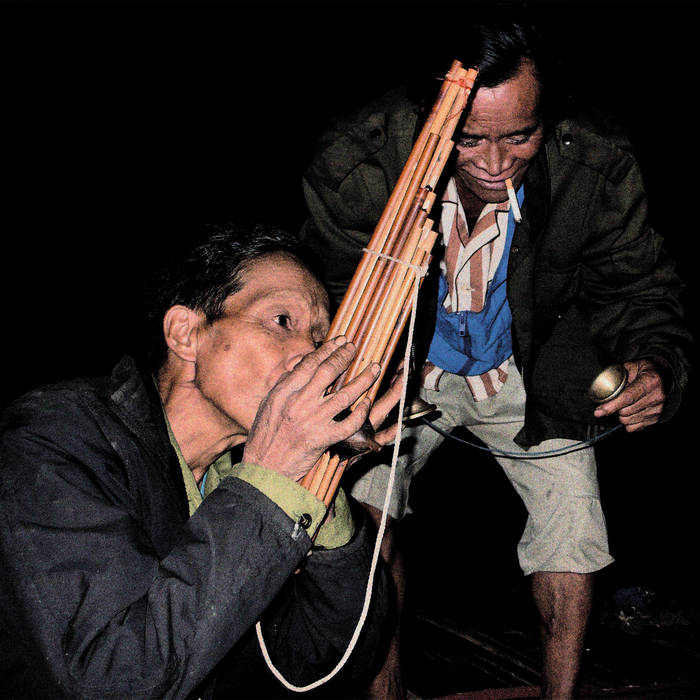 This is a compilation of various ethnic groups living in modern days LAOS, focusing on southern provinces of CHAMPASAK, ATTAPEU, SEKONG, SARAVAN.
Unlike the Khmer in Cambodia, the Thai in Thailand, The Kinh in Vietnam or the Han in China who are the overwhelmed majority in their country, the LAO are only half of the population of the 7 millions people living in Laos and they ve traditionally divided Laos in 3 populations categories :

1 The LAO LOUM (Lao in the plains, 68 %) where the LAO belong with other TAI-KADAI (LAO_TAI) populations (Track D1)

This classification is supposed to no longer exist, but to me it illustrates the ZOMIAN s concept of altitude as a social marker, kingdoms in the valleys with wet rice cultivation, written culture linked to Buddhism and the control of the Mekong versus other populations of oral animist cultures with slash and burn agriculture outside of the plains and seen as inferiors…

1 BRAO LAVE GONGS 5.09
played by men using a set of 3 different sized nippled gongs (GAWNG), 3 pairs of cymbals (CHAR), and one drum (hageur) in Touay/ Phaosamphan village, Pathoumphone district, CHAMPASAK. March 2006
The BRAO are 60 000 people spread in Ratanakiri, north-east Cambodia and Champasak & Attapeu in southern Laos. The term LAVE is a Laotian official designation. Like so many ethnic minority people, this village is a new village shared by different ethnic groups relocated by the side of the road, while the territory of their ancestors has been looted by Lao, Vietnamese or Chinese business.

2 TA OY COURTING SONG 4.46
ONG a 32 years old KATANG (highlander) man and KEO a 50 years old TA OY woman performing improvised responsive singing, the man alternates singing and using a Lao KHENE (a 16 bamboo tubes mouthorgan) in Tad Lo, SARAVAN province. November 2013.
Fueled with our favorite rice alcohol the performers are getting more daring in their jokes .
The TA OY number around 40 000 people spread on both sides of the boarder with Vietnam and Saravan province in Laos.


3 TRIANG PAO KABANG 1.12
5 bamboo tubes producing one note each played by 5 men, in LAMAM, SEKONG province. March 2006
I m not sure if they are related to the NYE / NKRIANG, they are definitely a very small ethnic group.

5 KATU song 4.21
about the hard life, living in the forest sung by NANG PIT 49 years old woman in Kokbountay village, SEKONG province December 2012
The KATU are an estimated population of 22 000 people, spread over the eastern part of Sekong and Saravan provinces of Laos and on the other side of the boarder in Vietnam. The center of their traditional territory is on the eastern side of the Sekong river : Kalum, an area that we could not access because the police did not allowed us to witness the massive deforestation going on ! Regardless, Katu people recorded here always refer to Kalum as their place of origin.

1 LAO LAM SARAVAN 6.12
performed by 3 old LAO men Bounthavy Namnakhon sings IN LAO, Tong Lo Khoun plays SAW a 2 stringed bowed instrument, Khamphan Kikounphan plays KHENE a 16 bamboo tubes mouthorgan in Champasak city, CHAMPASAK province November 2013
Molam or the art of singing is the epicentre of popular southern LAO culture, this culture goes beyond the southern LAO community in Laos and is widespread in an electric form among the Isan province of north east Thailand (where live 10 times more Laotian than in Laos).

2 OI duet 3.17
VILAIPHON 60 years old man plays DOUR ( mouth organ of 6 bamboo tubes inserted in a gurd) and KEYSON 52 years old woman singer in Lanyao tay village ATTAPEU province January 2013
The OI with an estimated 12 000 people live in Attapeu province, like the Katu and other ethnic minorities, the young people are rarely interested in maintaining their ancestral culture, laosization and thai tv are doing the rest , but here is real traditional OI music usually having 2 DOUR players, a small mouthorgan, , and a larger one, the latter missing on this recording cause it was broken and could not be repaired

Oakland producer Mejiwahn chats about his breezy and transportive LP.